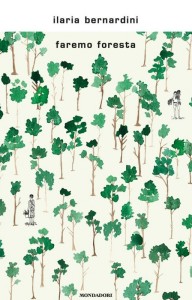 The enchanting story of two women who overcame fear and pain by planting together an urban forest. A universal recipe for when life feels barren. A botanical tale about closeness and care. It all begins in Milan on the day of the disaster. Anna is pining over the end of her marriage: she and the father of Nico, their four-year-old son, have decided to split up. On that day in her mother’s art gallery, Anna meets Maria, a girl who works there but whom she doesn’t know well. As they talk, Maria starts to feel ill, very ill. Anna holds her hand, watches her collapse. She calls for help. Only after the alarm, the ambulance, and the phone calls, does it become clear that Maria has had a brain stroke, before Anna’s very eyes.
There follows a long dry summer of convalescence for the one and uncertainty and sense of guilt for the other. By fall Maria recovers and Anna moves into her new home with her son.
How do you learn how to emerge again after months in a hospital and discovering how close at hand death is? How do you tell a four-year-old child that his mummy and daddy don’t love each other anymore? How can Maria start living again and Anna start feeling again? Her mother’s gallery is closing, she and her ex-husband have stopped looking each other in the eye, Maria too is left by her partner, jellyfish invade the seas, doomsayers predict that the world will end on New Year’s Day. Even the plants on the terrace of Anna and Nico’s new flat seem dead: all around the two women there is nothing but drought, sadness and gloom, as far as the eye can see.One day, after another chance meeting, Anna and Maria start tending to Anna’s terrace together. While Maria, who is an expert gardener, removes the dry vegetation, sows new seeds and re-pots plants, Anna cooks her a meal. And day after day, season after season, the two women begin to know each other, cure each other’s loneliness, and open up to new encounters and possibilities. The plants too, start to come back to life. Actually, they were really never gone.
Gradually the mint becomes green and strong (like Nico, who learns how to cross the park between his parents’ homes and to feed the blackbird), the lemon and fig trees bear fruit, the sunflowers grow into tall surprises, the oleander, strawberry tree and wysteria thicken – attracting birds and butterflies. Life spreads everywhere. And just like the terrace, this story becomes a forest, as unruly and wild as Anna’s new eccentric family. The forest is now so large that it extends to London, where Anna’s new lover lives and where she begins to consult a quirky, sexy fortune-teller for help in conquering writer’s block. It is her conversation with the fortune-teller – which often emerges among the pages with poetic flights and hints of the absurd – that foments the narrative.
Ilaria Bernardini has drawn on a small-scale private experience common to many – illness, the end of a marriage, a child who needs protecting from the transience of life – to depict a powerful, invigorating universe, in which words sprout like branches and leaves. Thus every event becomes connection and meaning: the whole of botany as an existential metaphor. With Faremo Foresta! we begin a celebration of care and hands in the soil, of attention and presence. We launch a hymn to a life to be shared, passed on, to help ourselves and the others. This book is more than a story: it is an empathic vision of the world, a precious reading for growing forests in drought.